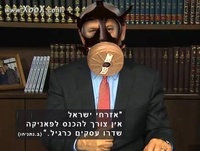 The Talmud says “If someone comes to kill you, rise up and kill him first.” This instinct to take every measure, even the most aggressive, to defend the Jewish people is hardwired into Israel’s DNA. From the very beginning of Israel’s statehood in 1948, protecting the nation from harm has been the responsibility of its intelligence community and armed services. Targeted assassinations is the one weapon in their vast arsenal that they have relied upon to thwart the most serious threats. Come hear Israel’s best investigative journalist, Ronen Bergman, as he shares stories of successful and failed targeted assassinations, on Israel’s enemies large and small. Bergman is joined by Bret Stephens, an op-ed columnist at The New York Times and former editor-in-chief of The Jerusalem Post.
השעה עכשיו היא Sat Sep 25, 2021 5:53 pm