Yesterday at 9:24 am על ידי roytmandavis

Yesterday at 9:11 am על ידי roytmandavis

Yesterday at 9:06 am על ידי roytmandavis

Yesterday at 9:06 am על ידי roytmandavis

Yesterday at 9:04 am על ידי roytmandavis

Yesterday at 9:04 am על ידי roytmandavis

Yesterday at 9:03 am על ידי roytmandavis

Yesterday at 8:59 am על ידי roytmandavis


Biogen is planning to file for U.S. regulatory approval for its Alzheimer's treatment after fresh analysis of its clinical trial showed promise, the drugmaker said. CNBC's Meg Tirrell Reports.

The PRIME study of the immunotherapy agent aducanumab for Alzheimer’s disease made big news recently. An investigator in ongoing phase 3 trials of the agent sizes up PRIME and looks to what’s next.

Drug company Biogen Inc. intends to pursue regulatory approval from the Food and Drug Administration (FDA) for their experimental Alzheimer's drug, aducanumab, based on new analyses of data from their Phase 3 clinical trials. The study results showed reduced decline in people with mild cognitive impairment and mild dementia due to Alzheimer's disease who received the highest dose of the drug over a sufficient period of time.

Dr. Ronald Petersen, director of the Alzheimer's Disease Research Center at Mayo Clinic, says aducanumab targets the amyloid plaques in the brain that are believed to be an essential component of Alzheimer's disease.

Aducanumab Heads to the FDA After Biogen Analysis Proves Positive in Early Alzheimer Disease
After pulling the plug on trials in March 2019, Biogen has announced that an expanded analysis revealed significant positive results for aducanumab in patients with early Alzheimer disease.

[size=33][size=33]That New Alzheimer’s Drug? Don’t Get Your Hopes Up Yet[/size][/size]
After declaring aducanumab a failure, the manufacturer now says the drug may help slow cognitive decline in certain patients. Some experts are skeptical.
https://www.nytimes.com/2019/10/22/health/alzheimers-dementia-aducanumab.html 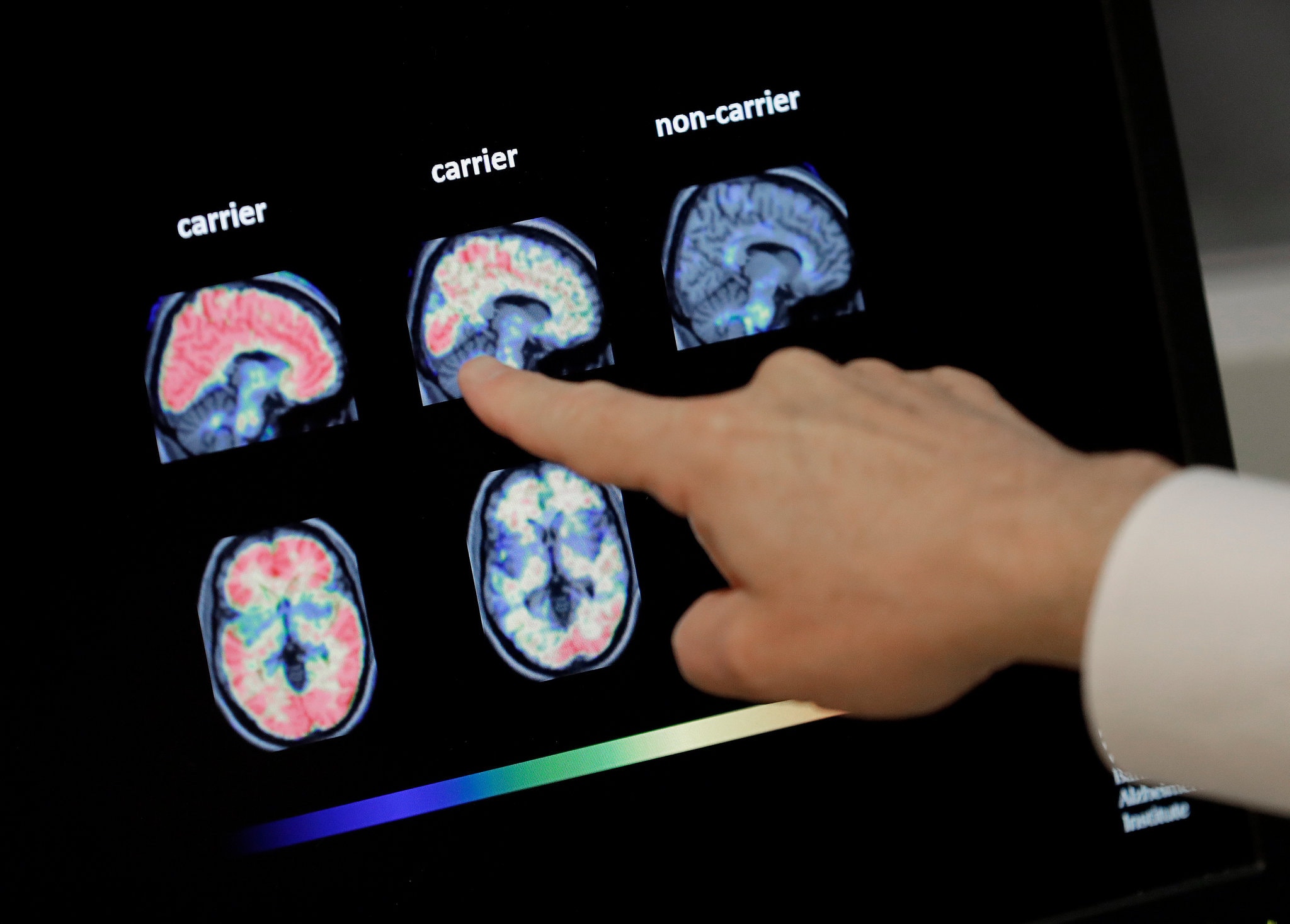 A review of brain scans of patients with dementia at the Banner Alzheimer’s Institute in Phoenix. Biogen, a drug company, said on Tuesday that it would seek approval for a drug to treat early Alzheimer’s disease.CreditMatt York/Associated Press


Aducanumab (BIIB037) was being developed by Biogen as a possible therapy for Alzheimer’s disease. However, in March 2019, an independent data monitoring committee determined there was insufficient evidence supporting the efficiency of aducanumab in treating the disease. As a result, all clinical trials testing the treatment have been halted.
The treatment was originally developed by Neurimmune, which, after entering a partnership with Biogen in 2007, had granted Biogen the license to further develop and commercialize aducanumab. Biogen had been collaborating with Eisai to advance the clinical studies of aducanumab since October 2017
https://alzheimersnewstoday.com/aducanumab/

Aducanumab is a human monoclonal antibody that has been studied for the treatment of Alzheimer's disease (AD).[1] It was developed by Biogen Inc., which licensed the drug candidate from Neurimmune, its discoverer.[2] The antibody targets aggregated forms of β-amyloid found in the brains of people with Alzheimer’s disease, in the hopes of reducing its buildup.[3] Biogen halted development of the drug in March 2019 after preliminary data from two phase III trials suggested it would not meet the primary endpoint.[4][5][6] On 22 October 2019 Biogen announced that it would be re-starting the FDA approval process for aducanumab stating that new analysis of a larger dataset showed that the drug reduced clinical decline in patients with early Alzheimer's disease when given at higher doses.[7] The reanalysis of the data from the discontinued trial concluded that patients receiving a high dose had a 23% reduction in their rate of decline.[8][9]

A phase 1b study was published in August 2016, based on one year of "monthly intravenous infusions" of aducanumab, with brain scans to measure amyloid plaques.[11] Phase 3 clinical trials were ongoing in September 2016,[11] but were canceled in March 2019 after "an independent group's analysis show[ed] that the trials were unlikely to 'meet their primary endpoint.'"[12]

Despite this, in October 2019 the company announced their intention to seek regulatory approval, following a reanalysis of the data
dima9000


Pharmaceutical company Biogen is halting two global phase-three trials testing the once-promising Alzheimer’s drug aducanumab, delivering a late-stage blow to researchers searching for therapies for the incurable degenerative disease.
“This disappointing news confirms the complexity of treating Alzheimer’s disease and the need to further advance knowledge in neuroscience,” Biogen CEO Michel Vounatsos said in a statement Thursday. “We are incredibly grateful to all the Alzheimer’s disease patients, their families and the investigators who participated in the trials and contributed greatly to this research.”
Biogen and its Japanese partner Eisai decided to end the aducanumab trials after an independent data-monitoring committee determined that the drug was unlikely to provide benefit to Alzheimer’s patients compared to a placebo, the company said in its statement. The committee did not find safety issues associated with the drug.
Aducanumab was meant to slow the rate of cognitive decline and functional impairment in people with mild Alzheimer’s disease by clearing amyloid from the brain. Amyloid protein is thought to contribute to Alzheimer’s-related decline by forming sticky plaques in the brain, potentially compromising nerve cells and leading to dementia and memory loss. The trial’s failure, however, calls that amyloid hypothesis — and potential treatment path — into question.
It’s also yet another failure in the search for a drug that can fight Alzheimer’s disease, which has been riddled with bad news in recent years. In 2018, pharmaceutical companies including Eli Lilly, AstraZeneca, Pfizer and Merck halted research or development into possible Alzheimer’s and dementia therapies due to disappointing results.
Jamie Ducharme
dima9000

Aducanumab, also known as BIIB037, is a human IgG1κ monoclonal antibody targeting a conformational epitope found on β-amyloid (Aβ) and has been used in trials studying the treatment of Alzheimer's disease (AD). It is derived from a de‑identified library of B cells collected from healthy elderly subjects with no signs of cognitive impairment, and cognitively impaired elderly subjects with unusually slow cognitive decline, and is being developed by Biogen Inc., which licensed the drug candidate from Neurimmune, its discoverer. The phase 3 clinical trials are ongoing.


Mechanism of Action of Aducanumab

The precise mechanism by which aducanumab exerts its therapeutic effects in AD is unknown, but is presumed to involve targeting aggregated forms of Aβ, including soluble oligomers and insoluble fibrils deposited into the amyloid plaque in the brain of AD patients. According to the results of a phase Ib study published in August 2016, aducanumab is shown to enter the brain of transgenic mouse model of AD, bind parenchymal Aβ, and reduce soluble and insoluble Aβ in a dose-dependent manner. In patients with prodromal or mild AD, one year of monthly intravenous infusions of aducanumab reduces brain Aβ in a dose- and time-dependent manner.
https://www.creativebiolabs.net/aducanumab-overview.htm
dima9000

http://www.neurimmune.com/newsarticle/
Neurimmune is a biopharmaceutical company translating B-cell derived genetic information of human immune repertoires into antibody therapeutics.
Neurimmune discovered aducanumab together with a team of researchers at the University of Zurich and licensed it to Biogen. Neurimmune collaborates on aducanumab with Biogen who co-develops it with Eisai.
Aducanumab is a human monoclonal antibody removing beta amyloid in brains of patients with Alzheimer’s disease. Based on large Phase 3 study results showing clinical benefit, Biogen plans regulatory filing for aducanumab in Alzheimer’s disease.
Neurimmune’s pipeline comprises drug candidates for diseases of the central nervous system and related protein aggregation diseases. With its Reverse Translational Medicine technology platform, Neurimmune is able to discover human antibodies against virtually any pharmacological target structure in the human body.
dima9000

https://www.en24.news/2019/10/revolutionary-drug-for-alzheimers-disease-resurfaces.html
[size=41]revolutionary drug for Alzheimer's disease resurfaces[/size]
[size=41]In March 2019, the biopharmaceutical company Biogen stopped the clinical trials for a new molecule used in the treatment of Alzheimer's disease: aducanumab. This drug, described as revolutionary at the time of its presentation, directly targets the amyloid deposits responsible – in part – for the disease. It represented a real hope for the millions of patients around the world, and stopping its development, for obvious reasons of inefficiency, was a shock for all patients. However, by re-analyzing the data from the two clinical trials, Biogen's researchers found that aducanumab slowed the progression of the disease at a high dose. A hopeful turnaround that should bring the drug back to trial.[/size]
[size=41]

Paper Alert: Aducanumab Phase 1b Study Published
https://www.alzforum.org/news/research-news/paper-alert-aducanumab-phase-1b-study-published
Scientists at Biogen have formally published the results of a clinical trial that dazzled the Alzheimer's disease field last year: Aducanumab, a monoclonal antibody against Aβ, wiped out a hefty proportion of plaques in the brains of people with AD. The findings, reported in the August 31 Nature, also hint at a functional benefit. On two tests of cognition, people on the drug declined more slowly and in a roughly dose-dependent manner. Incidences of brain-imaging abnormalities called ARIA-E, indicative of fluid build-up in the brain, also cropped up dose-dependently, but these abnormalities were transient. Alfred Sandrock of Biogen in Cambridge, Massachusetts, and Roger Nitsch of Neurimmune in Zurich co-led the trial. Some researchers lamented the overinterpretation of underpowered cognitive data, but applauded the drug’s apparent plaque-fighting powers. The field now awaits the results of two ongoing Phase 3 trials, powered to conclusively tease out any clinical benefits.
dima9000 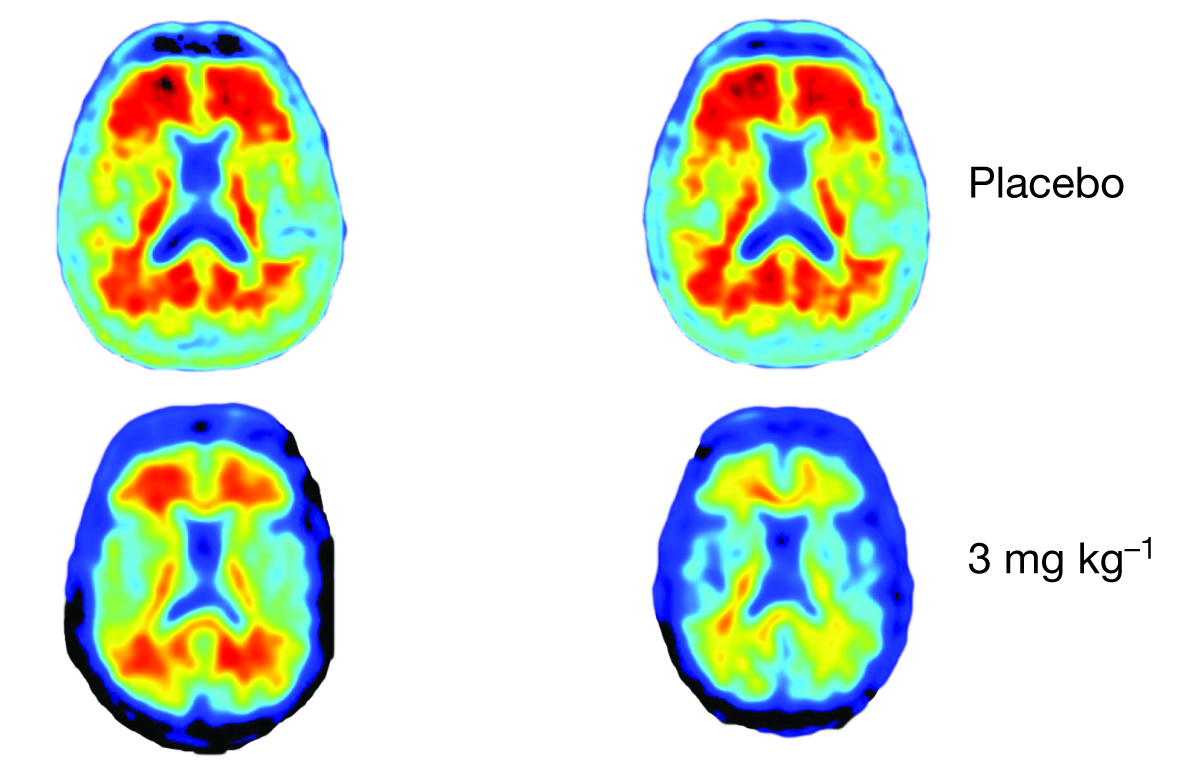 
[size=30]Aducanumab is an antibody, a natural substance the body produces to fight disease. 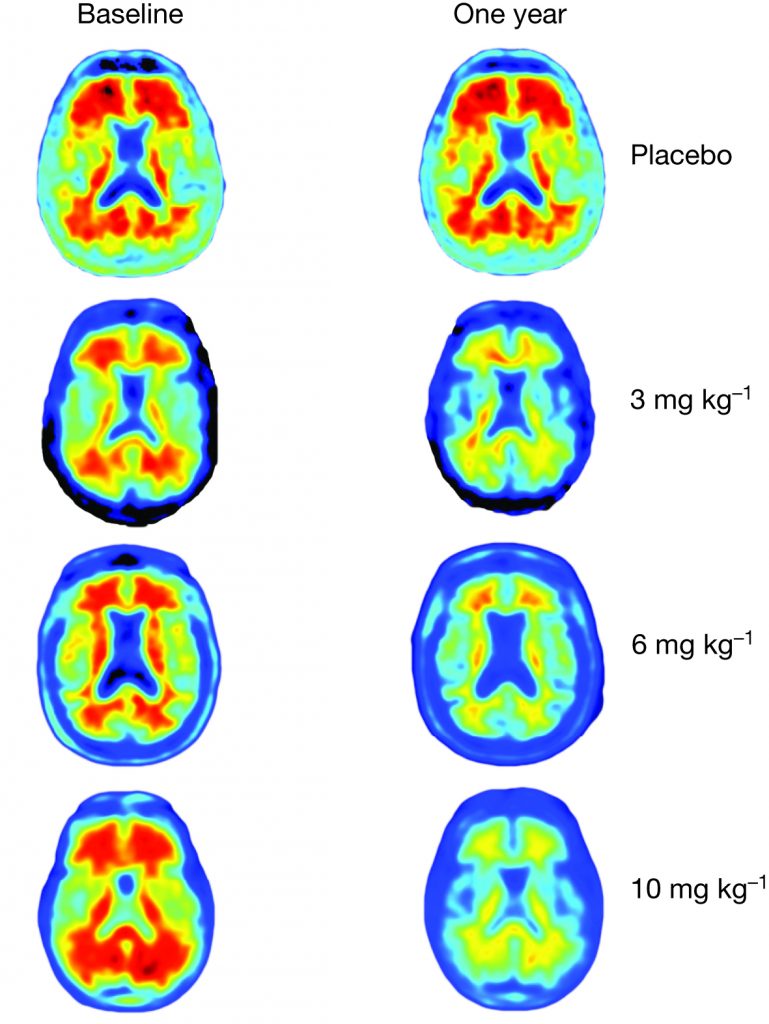 [size=33][size=33]That New Alzheimer’s Drug? Don’t Get Your Hopes Up Yet[/size][/size]
After declaring aducanumab a failure, the manufacturer now says the drug may help slow cognitive decline in certain patients. Some experts are skeptical.
https://www.nytimes.com/2019/10/22/health/alzheimers-dementia-aducanumab.html
dima9000

Biogen Plans Regulatory Filing for Aducanumab in Alzheimer’s Disease Based on New Analysis of Larger Dataset from Phase 3 Studieshttp://www.globenewswire.com/news-release/2019/10/22/1933045/0/en/Biogen-Plans-Regulatory-Filing-for-Aducanumab-in-Alzheimer-s-Disease-Based-on-New-Analysis-of-Larger-Dataset-from-Phase-3-Studies.html
dima9000

[size=35]We're on the brink of the first new treatment for Alzheimer's in almost two decades. Here's what you need to know.[/size]
https://www.businessinsider.com/biogen-plans-to-file-alzheimers-drug-aducanumab-for-approval-2019-10
dima9000

US firm Biogen is hoping for approval to bring about a treatment that could slow the onset of Alzheimer’s disease.
http://www.pharmafile.com/news/531800/biogen-aiming-aducanumab-slow-alzheimer-s-progression
dima9000

A new analysis called “EMERGE” led by Biogen in consultation with the FDA shows that administration of the drug may be able to reduce clinical decline in patients in the early stages of Alzheimer’s disease.